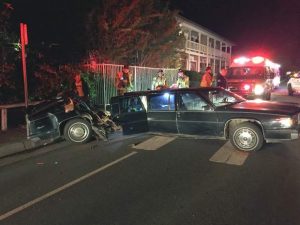 Tylka Law car accident lawyers see many cases involving insurance companies underpaying for medical procedures needed after an accident.  One of the cases we remember the most won our client 20 times the amount of his medical bills.  Read his story below.

The Scene of the Accident

Plaintiff Timothy Michael Grinage drove his 2005 Ford F-450 in a west bound direction in Orange County, Texas.  Based upon information from Mr. Grinage, defendant Raywood Joseph Cessac traveled southbound and attempted to perform a turn or cut across traffic lanes resulting in a collision.  According to Mr. Grinage, defendant Raywood Joseph Cessac failed to yield the right of way, attempted to turn or cut across traffic when not safe or reasonable, failed to pay proper attention, and failed to provide notice or warning.

After the accident, Timothy Grinage was shook up and in a state of shock.  Although he suffered some injuries, the symptoms were not life threatening and he thought they would resolve. Approximately 18 months after the accident, Mr. Grinage attempted to find medical care and treatment.  He could not secure treatment because of the lack of personal up front funds and insurance to obtain care.

After saving up, he received two months of chiropractic care from Bay Colony Chiropractic.  Because of continued pain, he obtained an MRI from Diagnostic Radiology of Houston.  The MRI, in brief reflected a torn rotator cuff.  Subsequently, a doctor examined and diagnosed Mr. Grinage.  The doctor issued a rotator cuff diagnosis and surgical recommendation.  The cost of future surgical treatment was approximately $12,000.00.  Unfortunately, Mr. Grinage did not have the personal up front funds to pay for such surgical intervention and was without health coverage which would afford ability to obtain surgical intervention.

The Trial and Award

Tylka Law typically mediates before going to trial.  Mediation often finds resolution for all parties at a much lower cost.  In this case, however, defendant Raywood Joseph Cessac’s insurance carrier Safeco Insurance offered less than the actual medical charges at mediation. The case went to trial, as the mediation result was not acceptable by either party.  Trial went before the Court and Jury in the 128th Judicial District Court of Orange County, Texas.  Mr. Grinage won, and the jury awarded him in the sum of $106,000.00.

In addition to trying the case against Mr. Cessac and his insurance carrier, demand was made against Mr. Grinage own under insured motorist carrier for policy limits which were paid.